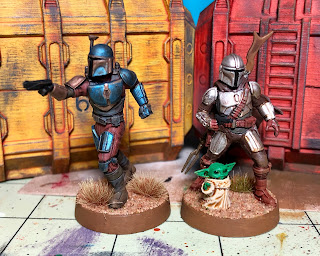 Its been a little quiet here of late as I've been on a bit of a Battletech kick. Nonetheless, you all know me well enough to know that I can't go too long painting any one thing before my brush wanders off to another genre. The latest result of that are the Mandalorians (and baby Yoda) that see above. 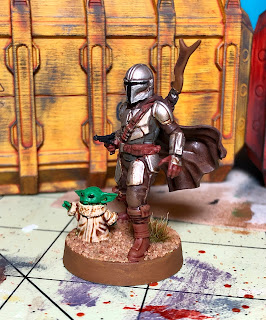 Yeah I know, Baby Yoda is supposed to be on his own separate base, but what-the-fuck ever. I have the second, 'eating a frog' baby Yoda on that base. 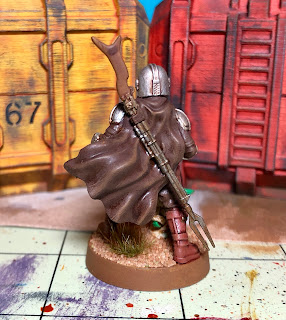 I'm rather pleased with how his cloak came out looking.

I bought Frankie The Mandalorian and Baby Yoda from Star Wars Legion for Christmas. Whilst I traded away most of my Rebels some ways back (I still have the half-painted pizza cannon), I wouldn't mind puttering around with the game a bit with Frankie at some future point, assuming of course that I can wrap my head around the rules.

Thus, I printed off the SWL rulebook, ordered some 3D printed 'insurgents' to stand in as Rebels to oppose my Mud Troopers (in that pizza link above), and painted a Mandalorian for the each of us.  The blue Mandalorian doesn't have Boba Fett's gun so I'll use the same Din Djarin stat card for both, just kitted out differently. 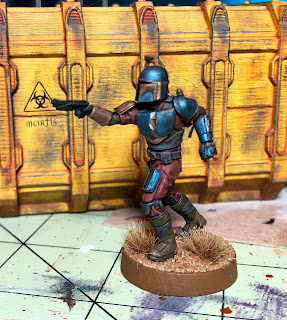 A Mandalorian. This guy was a freebee likely due to his scale being slightly off as he towers over my other Legion minis. Clocking in at 6'5" myself, I don't see this as an issue. 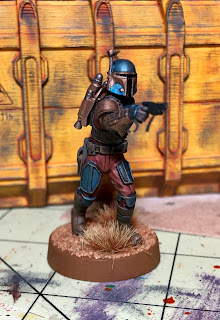 My backpack's got jets! My Beloved Wolfy love, love, LOVED that video...

I'll still need to get the dice and range/movement thing, but according to Table top admiral our forces look to be about 300-ish points a piece. Enough to get a taste without spending too much in the event that I/we don't like it.

While I have a few friends who play the game, I'm a bit wary as the local SWL demo guy tends to grind noobs into the dirt with meta lists from what I've seen. Personally I also find him irritating in general, neither of which is too enticing a prospect for a beginner. But we'll see what happens I guess...