Another round of X-Wing 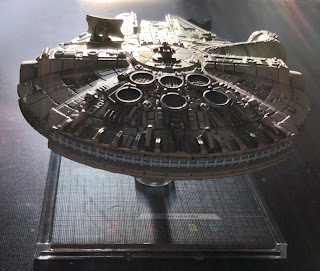 Been quiet here of late, due to a bit of family vacationing in Chicago. It was HOT! Expensive...but a hellova lot of fun. We really needed it and enjoyed ourselves immensely. Following that was a week of catching back up to reality...and finally this past Saturday evening, a 2nd game of X-Wing with Frankie. He's asked me to play close to a half dozen times since our last game, and he wanted to play a 'real game' this time, not a super simplified starter game.

So we played the standard 100 points, though I still left out rockets, missiles, torps, bombs, mines and ion. We also fielded what would be Neverness approved lists of all canon to the original trilogy ships, with the only named pilot being Chewbacca in the Millennium Falcon Red Kraken (once it is painted). There's a bit of an evolution in that name, but I'll explain that in a later post.

As usual it was turn 2 or 3 when both sides finally met and the general scrum began in earnest. 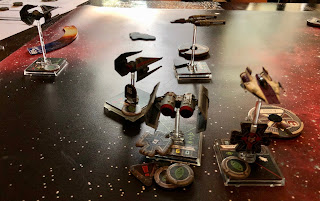 Despite having a YT-1300 flown by Chewbacca, he was a bit intimidated by the 6-strong TIE swarm. 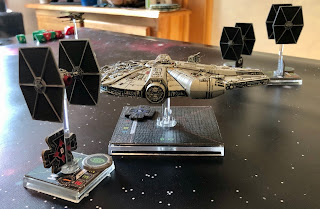 Or at least he was until he realized just how fragile they are... 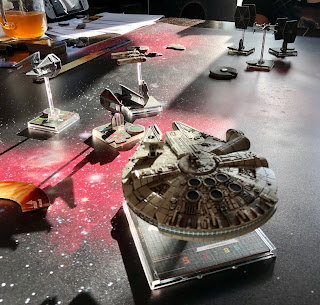 Despite the deep space map, we were clearly close to a nearby star, and it blinded me for a good part of the game. 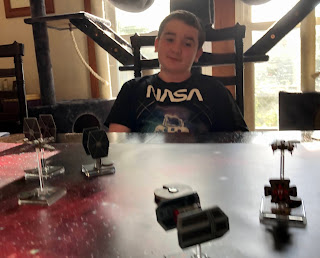 Two TIEs down for no losses, Frankie was feeling a bit confident with his prospects of victory... 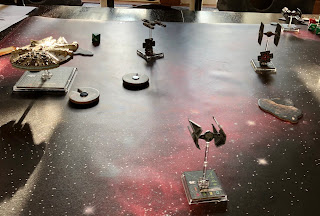 The board has thinned out a bit, with me having him once again outnumbered in terms of ships, if not hit points remaining. 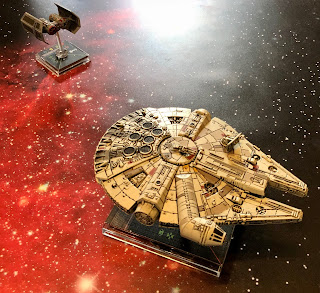 Eventually if came down to my TIE shuttle veteran leader and the Kraken in a 1 v. 1 duel of attrition that I was slowly losing. In this pic, the YT is parked on an asteroid. Despite explaining asteroids thoroughly, Frankie missed few opportunities to crash into them. 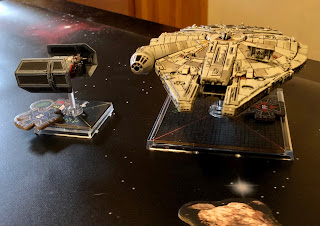 My wounded pilot (reduced to PS:0 due to a crit.) has had enough of the circling and sniping and goes into a (fatal) suicide charge, ending the game.

So I lost again. However this was still a learning game and thus I made him pick another maneuver when half way thru Chewbacca tried to K-Turn right off of the map. Indeed several turns later I let him shimmy the Kraken over a smidge after it technically flew slightly off of the opposite side of the map. So the loss is technically kindova moot point, but whatever.

Those two glitches aside, he's really catching on quickly and we had a whole lot of fun! Also this was the first time I ever had good success with the TIE shuttle. Using the veteran pilot, Push the limit and having a recon specialist crew upgrade really worked out well!

When last you met he was but a learner...well done Frankie!

I love that first pic, the lighting looks amazing in it.

Also yes I know, hence using that for the thumbnail/first pic. Not quite sure how I managed to get it to look like that as it's unfiltered, just cropped.

The Force was with you with that pic.