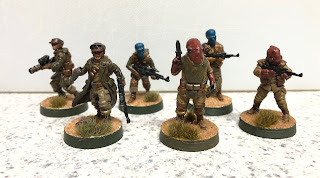 Here we have a generic Mon Calamari rebel officer and my first painted squad of rebel troopers all looking fit, and ready for battle. 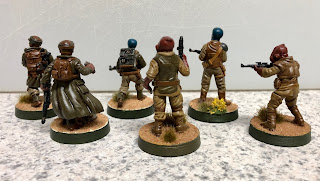 Whereas here is the side the Imperial troops most often see, the backsides of their retreating foe...lol.

I have several gaming friends and acquaintances who insist that Star Wars Legion is the BEST GAME EVAR!!! As for me however, whilst I do enjoy painting the minis for it...I honestly have no real want to actually try and play the game. Oh I might try it...maybe, but meh, I'm not really looking to. 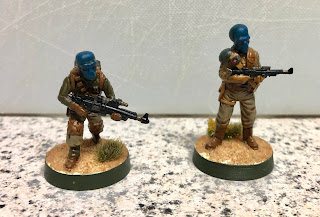 I was tempted to paint their skin grey, as they look like the stereotypical 'greys', but the blue provided I nice contrast to the otherwise very drab uniforms and kit.

They do paint up quickly, and fairly easily lacking GW's skull and/or oath parchment on every surface design philosophy. Both Mon Calamari as well as the Duro standing straight up are 3D printed, whereas the rest are *official* models. One gripe with SWL is the lack of miniature variety.

The core game gives you 2 IDENTICAL squads of rebels troopers. In a rebel alliance of a myriad of alien races, that's just kinda boring to me. Endless repetition amongst Clones, Storm Troopers and droids? Sure, no problem, but a mismatched collection of rebels? Not so much.. 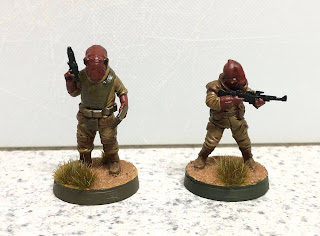 The eyes on these two were a bitch to paint, and honestly I still don't like 'em after several tries...

That's why in my small collection, about half of the minis are 3D printed, so that no 2 models are the same. A rare feat in this game it seems to me. Also I have a generic commander as much like Warmahordes, I'm tired of seeing the same dozen or so characters lead every battle (which is also why I almost never field special characters in 40k). Were I to actually play this game though, I'd need a named character as the generic ones look to be substantially weaker than their unique counterparts. 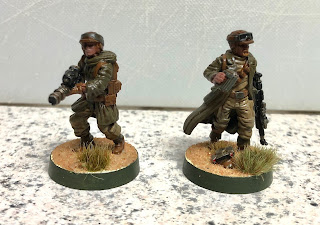 The trooper one on the left has an ion gun, whereas the guy on the right is the squad leader. Speaking of, the Ubese helm on his base came from a 3D printed sculpt of Leia in her Return of the Jedi bounty hunter disguise that I didn't like. That mini's legs were way, waaaay too long.

After taking these pics I did go back and reflock the bases of all but the Mon Calamari. I think they look much better now. My second squad is now primed and after I finish painting them, I have a 1.4fd P-Tower team to finish out this little force (I'm saving that for last as an incentive to paint the other 5 grunts first).

I like the diversity that you accomplished with this squad, your efforts paid off!