I'm off to a 'dazzling' start! 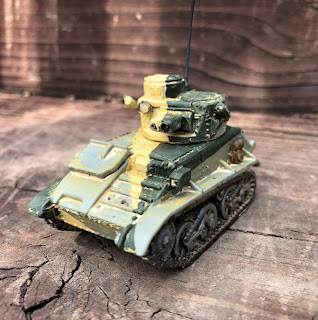 Well that was easy(ish). I started off painting my Bolt Action force with my little (but mighty?) Mk VI B. I finished it out in an evening and am rather pleased with it. I opted for the caked on dust wash much like my Incandescent Coyotes. Google any image of a combat vehicle in a desert environ and they all invariably are caked with dust. 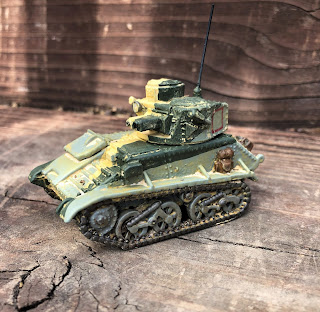 There is much online debate as to whether or not the color scheme used a light blue, or a light grey. I chose the sort of middle ground using GW's celestial grey, which has a tinge of blue to it.

The British, Dazzle camo style that was used in the desert campaign seems simple but is rather difficult to achieve. Painting straight, diagonal lines across the hull of a tank hasn't gotten any easier despite having painted a multitude of 40k tanks over the years. 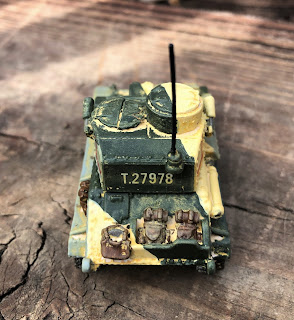 There's one famously photographed Mk VI B which sports the name ABERDEEN across the back of the turret bustle. However several others have (seemingly random) identification numbers, which as you can see is the route I chose to go.

This particular color scheme isn't based on any sort of historical unit, rather it just looked the part to me going off of the myriad examples that can be found online. The markings placement is also based off of what I found in google searches, though truth be told there seems to be little rhyme or reason to any of it. 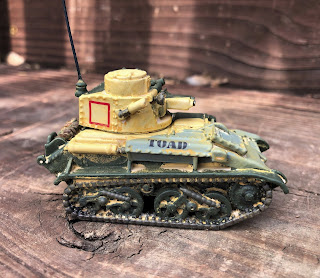 The large geometric shapes on the turret rear were quite common. Just what the symbolism of each means, mystifies me however.

Also I figure it would difficult to take a whole lot of pride (or any for that matter) in crewing such a cramped, uncomfortable and ridiculously inadequate combat vehicle. Apparently the tank's crew agrees as they've named it 'TOAD'. 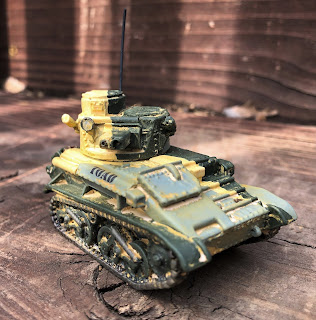 Armed with an HMG with a co-axial MMG and sporting 7+ armor, the Mk VI B can best be described as...first blood.

The geometric shapes were to denote which squadron the tank belonged to. A Brit WW2 marking that I think carried through to the end of the war in one format or another.

I like your Caunter scheme. Looks very well painted and the dust/sand just makes me want a margarita and my feet in clear blue waters. :)

Ah okay cool. I'll have to keep that in mind should I add anymore vehicles. I appreciate the compliments as well. :-) Pretty sure this is also the first time that any of my tanks (or minis in general) wanted to make somebody relax at the beach! lol